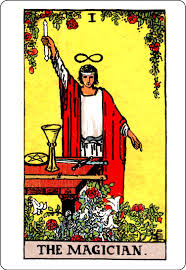 The Magician is a card associated with # 1, the sign GEMINI, Planet MERCURY_ Element AIR

Tarot reading interpretation for The Magician Tarot # 1  is one of  Logic- intellect and versatility.

Any glimpse of inspiration or higher knowledge is brought to us by Mercury, “the messenger of the gods”.

He represents the bridge between the world of the spirit and the humans.  His right holds a “magic wand” raised towards the sky and the left hand points to the earth; he takes the power of the stars and the sky channeling through his own body to direct it to the physical world.

As above so below

In a psychic tarot reading The Magician #1 reflects the ALPHA symbol of eternity, the same symbol is around his waist with a snake biting her own tale.

The power of The Magician Tarot # 1 is not a physical one, but a conscious spiritual one, receiving the inspiration and intuition to step forward.

The ability to see solutions clearly is very acute, self confidence is high and the intellect sharp! The energy is flowing upwards and downwards, as he creates illusions, which are represented by the flowers.

One is the number of beginnings, and The Magician # 1, holds a staff rose to the skies with the left hand pointing to the earth hence, he takes the power of the universe and directs it to the physical plane through his body. The snake biting its tail symbolizes eternity; the four suits of the tarot on the table symbolize the four primordial elements of the alchemist- earth, water, fire, and air.

The card can appear almost any time when you have creative energy, have the ability to absorb power from the universe and manifest the desire you have, and it can suggest presentation of a situation that will allow for the manifestation of your desires.

The tarot reading interpretation for The Magician Tarot # 1,  is one of  the conscious inspiration to apply skills and initiative to accomplish your goals. Appearance of the card may mean a strong desire to begin something new, a ‘can-do’ attitude and a strong sense of optimism to dominate a new act and thus the decision to be made will have positive results. The magician might also mean creation of success in everything you do.

If you have a specific wish, then the magician card is a good omen. The same is the case when you have a new project that requires creativity or making a transformation of any kind. The magician tarot card is a manifestation of benefits from creative forces if the power of awareness and concentration is acted upon. Magician tarot card manifests will power, impulse and action energy.

While the above are some of the possible meanings, the specific of the reading will vary from one reader to another and from one customer to another.

Keywords to apply in a psychic tarot reading: