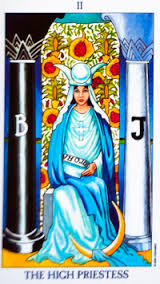 Associated with # 2 _ Planet MOON – Element WATER
The High Priestess #2 card is also referred to as Persephone in the Greek Mythology and Artemis Goddess of chastity and virginity, Corn Maiden in the American Indian legend of the Goddess of corn and finally Isis the Egyptian Goddess of Motherhood.   She sits at the gate in front of the great mystery, as indicated by the Tree of Life in the background. The High Priestess sits between light and darkness, with light being represented by the pillars of Solomon’s temple. This could be translated to mean the high priestess is the mediator in the passage of dreams to the deeps of reality. The tapestry in her back has pomegranates which are sacred to Persephone.
Following the Greek mythology, her mother Demeter despaired at her disappearance and searched for her the throughout the world accompanied by the goddess Hecate bearing torches. When she learned that Zeus had conspired in her daughter’s abduction she was furious, and refused to let the earth fruit until Persephone was returned. Zeus consented, but because the girl had tasted of the food of Hades handful of pomegranate seeds–she was forced to forever spend a part of the year with her husband in the underworld.  Pomegranates are symbol of fertility.   The pomegranates are a symbol of duty because Persephone ate a pomegranate seed in the underworld, and this forced her to return annually.
Her annual return to the earth in spring was marked by the flowering of the meadows and the sudden growth of the new grain. Her return to the underworld in winter saw the dying down of plants and the halting of growth.  In other myths, Persephone appears exclusively as the queen of the underworld, which we can translate to the unconscious mind.
In a psychic tarot reading The High Priestess #2 shows a  blue robe worn by the priestess as a symbol of emotional control and the holy books knowledge. She wears the Isis crown which is a symbol of Motherhood. On her breasts is a solar cross is symbolizes balance between female and male. On her lap the priestess holds the half-revealed and half-concealed Torah, which represents the exoteric and esoteric teachings and higher knowledge. The moon under her left foot is a show represents her intuition.
Meanings:
The High Priestess card therefore may mean the need to gain knowledge before acting; instinctual knowledge, supernatural knowledge, self-knowledge, secret knowledge. For those who seek more, the High Priestess goes beyond. Behind the high priestess’ throne is the curtain leading to the deepest most esoteric knowledge. The high priestess card is a guide that is secretive mysterious and mystical.
Keywords to apply in a psychic tarot reading:
Esoteric knowledge – Past conditioning – Psychological insight – Body fluids – Celibacy.
Job associated:
Psychic – counselor – need for further education – intuitive confident, spiritual advisor.
Challenges:
Need of rational mind – Observing but not taking action – repressing sexual desires- lack of practical mind.