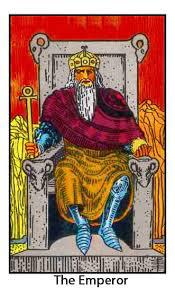 Control of the mind over the heart

Aries rules the head, which means that authority requires a good headed personality. The Emperor # 4 is powerful and willful, he rules through logic and reason. Sometimes rigid, inflexible and stubborn, his word is the law.

He is both: the sovereign and the fighter.   Because of the fire element, he can be hot-headed. We are facing the CEO of Multinational Corporation.

In a tarot reading the Emperor is the born leader; fearless, confident and courageous; very controlling and disciplinarian.   He is forceful, direct and without scruples. Remember that the Emperor leads or owns a vast collection of kingdom’s, lands, and territories.

When performing a psychic reading you have to remember that Mars is the planet associated with action, a passion of war, aggression, self-defense and physical wounds.

In the right hand, we see a cross, an Ankh, the Egyptian symbol of Life and in his left hand is an orb representing the world over which he rules.

He is a crowned monarch – commanding, stately, seated on a throne, the arms of which rest supported by rams’ heads.

The ram is also a symbol of Aries, the astral rule of the Emperor. The orange background and the Emperor’s red clothing mean his passion and energy for life.

Meaning of the Emperor # 4

The Emperor – rules over matter bringing earthly authority over the spiritual authority of religions; can also indicate material stability or a need of controlling attitude. With his scepter, he brings to mind an imposing person, one who brings orders and expects others to obey. The scepter is also a phallic symbol of male superiority over females.

Negative meanings: dictator, abusive personality, macho attitude, and a constant need to be in control.