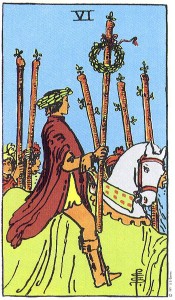 The Six of Wands comes after all the commotion in the Five – After the battle for supremacy in the Five – a victory has emerged and he carries out his triumphant lap of honor.  His opponents or competitors now cleaned and march behind him and to his side carrying their own Wands which they wave enthusiastically in the air.  It had been a tough game, a long tournament and many battles fought throughout.

In the Six of Wands, the man sits erect aboard his mount. Dressed in a long orange robe, with tan leather boots and gloves, he holds his head in a proud manner.  Upon his head he wears a large laurel wreath and in his right hand is his Wand.   Wreaths symbolically represent victory and success.

The man’s appearance and posture suggest strength, pride and self-confidence.  Both he and the horse are dressed for show.  Even though the horse looks as if he is about to burst out of his skin at any moment, the man feels no need to hold the reins with both hands as he knows his power and influence, and in turn, the horse accepts the man as his master.  He is in full control at present but must remember that it is only because the horse is willing.  Should he choose to do so, or if he became annoyed or tired of the man at any stage, he could take off or dump him in a ditch.   At present, the horse will allow him to have his way.

Now he must come down from his horse and begin to walk among his people or fans as soon as he can otherwise there is a danger of growing distant and disconnected from those who have helped him to get where he is today.  He must guard against being famous just for being famous.  He must not lose sight of his original goal.

In a tarot reading  the Six of Wands obviously suggests success and victory. Yes, you will get that job or promotion for you have come out on top and beaten the stiff competition. A successful career in sales is often represented by the Six of Wands or a successful politician.  In business, all the hard work and effort have paid off as you begin to reap the rewards and acknowledgment.  Your business may be gaining a lot of public attention or you could be receiving endorsements from celebrities or people in high places.

The Six of Wands suggests a successful relationship where both partners have similar goals and are go-getters. Generally, the couple involved would be naturally competitive but not with each other.  They support and celebrate each other’s successes.