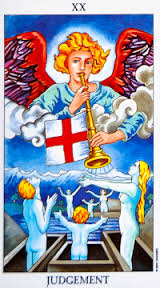 The Judgement image represents The Phoenix rising from its ashes

In Astrology Pluto represents Death – resurrection – forgiveness and release. For many this is Karma, for me it is what it meant to be your destiny.  Pluto is also the planet of evolution and unavoidable change. At the same time, Pluto rules Scorpio the sign of Mystery and the ruler of the eight house that brings information about sex, death, inheritance and illegal businesses.

When this card shows up you ask your client:

Did you find your purpose in life?

Did you go after your dreams?  If the answer is no, it is the time to do it.

The top half of this card depicting an angel blowing his horn. In most Tarot decks, his large wings are astride wispy gray and white clouds, out of which his arms extend to clasp a large golden horn, upon which he is pressing his lips. Attached to the musical instrument is a square white flag with a red cross. The illustrated lines emanating from out of the trumpet indicate that Gabriel is blowing his horn. Beneath him, the graves of the departed have all opened and the dead have begun to rise; and they seem to be very happy!!

The judgement # 20 tarot card is the scene of the last judgment as described in many mythologies. In the end of times, the archangel Gabriel will blow his trumpet and summon the dead to rise. They are about to meet their maker and discover whether or not they are to spend eternity in heaven or in hell. When this card appears in your Tarot reading, be assured that absolutes are about to take place.

The Judgement # 20 tarot card reading can have multiple meanings like for example a call to action – renewal- an identity crisis – awakening – metamorphosis and more.