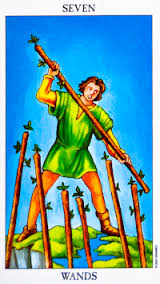 Before the Seven of Wands, in the Six of Wands tarot, we saw the show of victory. Here comes the aftermath or the price to stay at the victorious place. The parties and celebrations are over. Stripped of all his fine trappings and back down on earth. He looks no different from the other men who still surround him.  The man is tired now and would like to go home and have some time to himself. Since there is still an entourage following him around planned to maximize it on the back of his increased popularity and recent success.

In the Seven of Wands tarot card, the man had his own plan of action and was not used to being told what to do by anyone else. He was a Leader and used to being in charge. He wanted the freedom to be his own boss and take the world by storm. He wanted to be famous and top of his game.  He wanted this and more, but he wanted it on his own terms.

The Seven of Wands is a Card of tenacity and standing your ground. There may be many who seek to take your position.  Fighting off stiff competition will either strengthen your resolve or leave you weakened and exhausted. You may be fighting to hold onto possession of something you consider rightfully yours.  You must have a clear game plan. You may have to act assertive and defiantly.

The Seven of Wands can highlight the need to be on your guard at all times and having to watch your back. You may feel alone in a situation and that enemies are following you and can trust no one. This demands courage and stamina of you. Don’t give up without a good fight. No doubt it can get hectic at times, but that’s the price you pay for success.

The Seven of Wands may appear when you have striven for or fought for and finally now is yours. But, it does not bring you the happiness you hoped for. You may ask yourself what you have done to deserve all this stress.

You must fight to stay at the top. This is a daily challenge and the position you fought for in the Five. And, won in the Six must now be retained as others quite possibly are after your job. Meetings, negotiations and conferences are suggested with much opposition and criticism from the majority.  No matter how stressful the situation, the Wands type would enjoy all the fire and risk that goes with the territory.  You may also be working in an aggressive environment, and have a personal issue with power delegation

It’s a time of great challenge within the relationship. One partner may have to defend their position and justify their actions to the other.  Your relationship may have changed. Your relationship is disapproved of by friends and family. You may be constantly defending your partner and your relationship and as a couple it can leave you feeling very isolated.

There may be the arrival of a new baby which is exciting but challenging at the same time as you try to be everything to everybody but don’t have any time for yourself.

If you are going through the divorce courts then prepare for an almighty battle but you should come out on top.

You may be worrying unnecessarily. Even when facing serious health challenges, a positive attitude can work wonders.